Contempt in Court: Too Many Lawyers’ Attitude Toward Jurors

The online blog of the ABA Journal asked a question recently: “What words or phrases do you think should be avoided in front of a jury?”

There were some pretty good jokes and even some good advice . . . and there were some answers that seemed downright contemptuous of jurors. I have seen it in a few different online locations lately, as well as heard it in subtle forms over my career as a trial consultant. And I have a message for lawyers who look down on jurors either consciously or unconsciously:

Knock it off. You’ll win more. 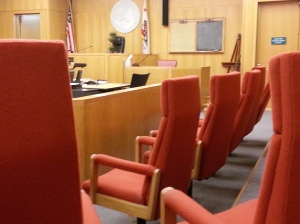 Counsel, YOU are the one asking ME to help your client. Please don’t be a wang. –Every Juror Ever

One comment really struck me—in part because of its content, and then an echo wave of agita because I then realized how many times I had heard lawyers say similar things albeit less bluntly for the last 20 years. It came after several suggestions from other lawyers, and apparently, this poster had had enough.

‘Subsequent’ and ‘commence’ are to “big” to be used with juries?  Three days to figure out “The Court” and the judge were the same?  I bet “your Honor” really threw them for a loop.  REALLY?  I guess my torts professor way back in the day wasn’t kidding when he repeatedly referred to juries as “the 12 ignorant slobs.”

I think my favorite thing was that he misspelled ‘too’ in the first sentence.

And yes, this guy’s post is extreme, so it makes it an easy target, and easy to dismiss as abnormal for courtroom lawyers.

That would be comfortable. But wrong. Yes, his comment is intemperate, but if it were dialed down to about a ‘5,’ lots of lawyers have said similar things. Maybe in many cases without realizing how contemptuous or condescending it is to look down on people just because they don’t know certain discrete things that we do—or that they simply don’t agree with our view.

How familiar do any of these sound to you?

“We have to dumb this down for the jury.”

“We lost because the jury didn’t understand the case [and that’s their fault].”

“We will win if the jury focuses on the facts; we will lose if they give in to emotion.”

(This last is one of my favorite metaphysical puzzles—everyone thinks that a factual focus will favor them, because fact = truth = good = our side, whereas emotion = non-truth = dishonest = bad = their side. Spoiler alert: all human decisions are made through emotional filters, whatever else they may contain or omit.)

Jurors are not stupid.

They are out of their element and squarely in the courtroom lawyer’s playhouse.

All the prospective jurors who had great knowledge about the subject of the case got excused during jury selection, which counsel should damn well understand because they challenged them. It has always struck me as crazy hypocritical when lawyers complain that jurors “don’t know anything” after actively booting off the ones who did.

No, I am not suggesting leaving the subject matter experts on your jury. Of course they have to go 98% of the time. But do quit complaining that jurors don’t know anything when we rigged it that way, and take the damn responsibility for educating the remainder in a way that benefits our side.

Jurors don’t need things “dumbed down” – they need things clearly explained to them just as you would if you were thrust into a foreign arena in which you have great responsibility accompanied by the insecurity of knowing that you are not native to these parts. It should be obvious that (a) they didn’t go to law school like you did, (b) they don’t know the same phrases you didn’t know either before going to law school, and (c) you and your counterpart cleared out all the ones with experience and education in the topic.

Oh, and (d) in a universe of things, there are things they know that you don’t. I recently had a jury that included an electrician, a forensic accountant for the IRS, a lawyer who does mergers & acquisitions, and a director of a non-profit youth organization. I freely admit that I am quite unknowledgeable about everything they do beyond the pitifully elementary. I’m not stupid and neither are they. We just know different stuff. It’s a big universe.

And if explaining things clearly to an audience you understand to be a group of laypeople with diverse experiences, careers, walks of life, and education is described as “dumbing it down,” someone must explain to me what is so damn smart about pitching one’s case to a group of laypeople using language and jargon that is accessible only to the initiated.

Try this. Imagine that you have been forced by law to go to Australia—a place where they speak English . . . but it’s not English like you speak it. There are phrases that sound somewhat familiar but you’ll eventually learn have different meanings than you think, along with plenty of phrases that have no meaning at all to you. Two locals with mostly opposing agendas are going to shower you with exhibits and waterlog you with words to get you to side with them. You are very limited in the kinds of questions you can ask to clarify anything, and the guidance they provide at the end is often unclear and confusing—yet you are the one who will have to render a decision that will affect a lot of people.

And now let me tell you that the predominant topic is cartography, and the infernal trade-offs that different projections force cartographers to make when representing three-dimensional objects on two dimensions, the political, social, and economic ramifications of those projection choices, the never-ending challenges of scale, and so on. Perfect for you, yes? I’m sure it’s right up your alley. (It was that or the vexillology discussion down the hall, and the semiotics of some banners in dispute. Sound better?)

Got the hypo? Have you put yourself in that state of mind? Good. I have one question for you.

Or are you just out of place a little bit? Are you maybe in need of a little compassion that you got yanked out of your life where you do understand most things? Put into an unfamiliar setting with an elaborate culture you know little or nothing about? And if they would just explain things appropriately for someone they already know isn’t very familiar with this stuff, you would be fine?

What would you think of the Australian advocates who are doing their block when you don’t seem to av-a-go-yer-mug; you think they’re going flat chat and have tickets on themselves, while they consider you a drongo?

Exactly. You would think those advocates should make it easier for the audience they knew they had.

A few things that the best courtroom lawyers do:

Another comment from that board came after several good suggestions from other lawyers:

“Yet we are quite happy for the jury to decide our cases?  Strange.”

Again, I was struck by the disdain for jurors held by someone who presumably does jury trials. In many studies of civil cases, panels of subject matter experts read trial transcripts and look at the exhibits, and describe what their verdict would be. It ends up being the same as the jury verdict over 90% of the time. That’s not coincidence. In between not knowing that ‘proximate’ and ‘approximate’ are different words, not knowing that ‘damages’ means money and does not refer to damage, they somehow manage to get it right.

And if you sincerely believe that in a given case they didn’t? Ask yourself who their trail guide was through the unfamiliar territory.

If you have not already read these somewhat related posts, I invite you to do so: Lawyer Vocabulary Banishments, Part 1; Part 2; More On Jury Selection; Where the Mind Meets the Mouth.

This entry was posted in Writings. Bookmark the permalink.

2 Responses to Contempt in Court: Too Many Lawyers’ Attitude Toward Jurors

What are your thoughts and experiences? Cancel reply

CalPERS, CalSTRS and other government pensions

The Legal Advocate
Verdict is in Blog

The Craft and Business of the Courtroom Lawyer.